Back of Beyond authors named finalists for prestigious literary award

George Ellison and Janet McCue, co-authors of Back of Beyond: A Horace Kephart Biography, have been named finalists for this year's Thomas Wolfe Memorial Literary Award. Presented by the Western North Carolina Historical Association, the award is giving in recognition of distinction for qualifying works of fiction, nonfiction, drama or poetry.

The culmination of decades of tireless research and devoted scholarship, Back of Beyond: A Horace Kephart Biography is the compelling story of this librarian-turned-woodsman who had a far-reaching effect on wilderness literature and outdoor pursuits throughout North America. Kephart’s advocacy for the establishment of Great Smoky Mountains National Park earned him the title Apostle of the Smokies.

A banquet and awards ceremony with readings from finalists will be held Saturday, November 16, from 4 to 6 p.m. at the Asheville Renaissance Hotel.

Words of Praise for Back of Beyond

“George Ellison's and Janet McCue's compelling bio of Horace Kephart is a timeless classic that is long overdue. The authors leave no stone unturned in their balanced, unflinchingly accurate depiction of the enigmatic, yet immensely talented Kephart, whom they rightfully describe as being 'both a genius and a train wreck.” Perhaps just as importantly, the book offers concrete proof of the healing powers of the Great Smoky Mountains. This is biographical writing at its best—entertaining and fast-moving, built on a rock-solid foundation of superb documentation.' ~ Bob Plott, historian, author of five award-winning books about the Plott hound and Southern Mountain culture, and the 2016 recipient of the prestigious Long Leaf Pine Award

“Surprisingly, there has been no book-length biography of the legendary Horace Kephart—until now. Both Janet McCue and George Ellison were the perfect choices to fill this need. Back of Beyond is a deeply researched and exciting account of Kephart’s life and work, enriched by the authors’ wide knowledge of history, the Southern Appalachian region, and Kephart’s landmark studies of the Southern Highlands, its people, and such subjects as camping and woodcraft, environment, and folk culture. With affection and candor, McCue and Ellison reveal an intimate knowledge of Kephart’s ancestry, education, marriage, and career, his place in American literature and history, and his part in the founding of the Great Smoky Mountains National Park. Finely crafted, carefully thought out and documented, Back of Beyond is the biography we have long been waiting for.” ~Robert Morgan, author of Boone: A Biography

“Back of Beyond - A Horace Kephart Biography is a masterpiece! Reading it reminded me of working a puzzle. In my case, I had filled in the borders and some of the interior elements of Kephart's life; however, after reading Back of Beyond, the puzzle revealed Horace Kephart, the complete man. This important biography illuminates in rewarding detail Kephart's life with all its facets and complexities, including a detailed account of his contributions to the creation of the Great Smoky Mountains National Park. George Ellison and Janet McCue are to be commended for authoring this excellent work. It is a "must-read' that does not disappoint.” ~ William A. Hart, Jr., author of 3,000 Miles in the Great Smokies

“Best known for his influential books Camping and Woodcraft and Our Southern Highlanders and for his support of establishing the Great Smoky Mountains National Park, Horace Kephart has nonetheless remained a mysterious figure. In the first full-length biography detailing Kephart’s long and varied career, Ellison and McCue enliven a complex man by exploring his family relations, friendships, and community involvement. They explain his enduring mystique as they chronicle a life that encompassed a lonely childhood, a career as a respected librarian, a period of deep personal anguish, and finally a renewal in the Southern Appalachia he sought out as his back of beyond.” ~ George Frizzell, former head of Special Collections, Hunter Library, Western Carolina University, where the premier collection of Horace Kephart manuscripts is housed

“George Ellison and Janet McCue are superbly suited to be co-authors of this captivating biography. George knows every rock, leaf, and twig around Hazel Creek in Kephart country. He is a highly respected authority on all things Appalachia. Janet inhabits Kephart's other world. Her Cornell University community plays a huge role in the stories of Horace, his wife, and children. Both writers are long-time Kephart devotees and scrupulous collectors of his archival material. Just as Kephart's meticulous mountain journal is the palette from which he painted masterpieces, exhaustive research informs and animates Back of Beyond. The authors are tremendous scholars and wordsmiths. Accordingly, they have penned an enthralling account of an extraordinary life.” ~ John White, Ed.D., writer/producer of Lost Masterpiece: Karl Brown's Stark Love

“In Back of Beyond, the first full-length biography of Horace Kephart, Janet McCue and George Ellison delve deeply into the family dynamics, societal pressures, and chronic health issues that shaped this most enigmatic chronicler of the life and manners of the early 20th-century Great Smoky mountaineers. McCue and Ellison have painstakingly uncovered a wealth of source material previously untouched by earlier scholars. Meticulously researched, Back of Beyond is not only the most historically significant book ever published by the Great Smoky Mountains Association but is a groundbreaking achievement that will infuse fresh vigor into the world of Kephart scholarship.” ~ Ken Wise, director of the Great Smoky Mountains Regional Project at the University of Tennessee Libraries

“This long-awaited biography of Horace Kephart is so well written and informative that one reads it with the pleasure of a riveting novel and an admiration reserved for the finest scholarship. Kephart was a complex man, and Ellison and McCue show that complexity. Back of Beyond is a triumph.” ~ Ron Rash, author of Serena

“Those of us who have read Horace Kephart’s books have come to treasure the writer, but with Ellison and McCue’s richly detailed Kephart biography, we come to know the man. The authors intricately reconstruct Kephart’s life and influences, tracing his journey from the Iowa prairie to the directorship of St. Louis’ Mercantile Library, where Kephart lost nearly everything. Ellison and McCue unflinchingly describe Kephart’s dismal fall—dismissal from his job, separation from his wife and six children, and a descent into madness—as well as the salvation he found in a primitive Smoky Mountain cabin. Ellison and McCue are exacting historians; they’re also fine writers, and this book is a joy to read.” ~ David Brill, author of Into the Mist and As Far as the Eye Can See

“As a boy growing up in the far western tip of North Carolina, what I knew of Kephart seemed almost as legendary and mysterious as the mountains themselves. I’ve kept a tattered copy of Our Southern Highlanders near my writing table for decades, but a biography of him has been a very long time coming. This meticulously researched and carefully considered book more than fills the void—it is a great contribution to the history and culture of the Southern Appalachians.” ~ Charles Frazier, author of Cold Mountain, winner of the National Book Award for Fiction

“Kephart was one of my boyhood heroes. Ellison and McCue have reaffirmed my appreciation for a man who had demons no different than many of us, and who dealt with them while creating two literary masterpieces that have stood for 100 years. Through careful research and cultivation of relationships with the Kephart family, new and valuable insights have given us a refreshing look at the man called ‘the enigma.’” ~ David Wescott, author of Camping In The Old Style

“Back of Beyond is an illuminative and exhaustive journey through the life of Horace Kephart. George Ellison was destined to write this book and Janet McCue complements his poetic and naturalist penchants with the diligence and research acumen that a subject as panoramic as Kephart requires. Through these storytellers, we can finally know the real Horace Kephart and the complex story of the passions that fueled his work along with a wonderful ‘supporting cast' including my favorite: photographer George Masa.” ~ Paul Bonesteel, director of The Mystery of George Masa documentary

“There’s a magnetic power in those Great Smoky Mountains that compels us to explore its natural beauties as well as its human footprints, such as those of Horace Kephart. With a consuming passion, authors Ellison and McCue have extensively researched and embraced the life and legacy of this important historical and literary figure in Smoky Mountain history. In this brilliant, indispensable resource preserving Southern Appalachian history, we experience Kephart’s early life and career as well as his personal challenges; find a new home with him in the Smokies; and explore its rich backcountry in the years leading up to its birth as a national park.” ~ Marci Spencer, author of Clingmans Dome, Highest Mountain in the Smokies and Potluck, Message Delivered: “The Great Smoky Mountains are Saved!”

“Previously, readers knew about Horace Kephart primarily through his own voluminous writings, yet little was known about his personal life before arriving in Western North Carolina. With the benefit of new archival materials, biographers George Ellison and Janet McCue meticulously fill in gaps to show how this man with an excellent education acquired from books expanded his knowledge to the outdoors with the help of an extensive cast of friends and acquaintances who introduced him to a place he came to love: the Great Smoky Mountains. While readers come away from this wonderful biography with a fuller portrait of the elusive Kephart, they also emerge with incredibly rich knowledge about his role in the history of a region that continues to attract thousands of visitors every year.” ~ Mae Miller Claxton, author of Conversations with Dorothy Allison, Conversations with Ron Rash, and Teaching the Works of Eudora Welty: Twenty-First-Century Approaches

Listen to ‘The State of Things’ show host Frank Stasio talk to the authors about their new book.

Read a Conversation with the Authors

Available at these Partnering Bookstores

What the Media is Saying about Back of Beyond

George Ellison, renowned local naturalist, author and historian, teamed with Janet McCue, a noted retired librarian and Kephart researcher, on this fresh look at Kephart’s life. The two were able to access archival material about Kephart to help fill in some of the gaps in his life, of which there were quite a few, given his often-reclusive and sometimes withdrawn nature. ~ Jim Buchanan, The Sylva Herald 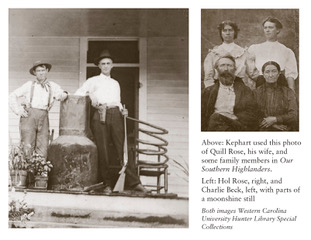